Retail therapy has become retail liturgy: an exercise in public worship shared and practiced by believers in the transformative power of shopping. Dundrum Shopping Centre is the Pro-Cathedral of retail liturgy, and the Blanchardstown Centre is Christ Church Cathedral (though I might have my denominational allusions confused).

The idea that shopping has become a form of collective worship is one developed by James K A Smith.  His Theos talk - The Secular is Haunted - introduces Jamie's thoughts on Canadian philosopher Charles Taylor's ideas about secularism, including our need for liturgy - sacred or secular.  I'm also reading Jamie's introduction to Taylor - How (Not) to Be Secular - and it is a delightful read.  Anyone who can weave Radiohead, David Foster Wallace and Augustine into a narrative knows how to engage his reader.

Maybe it's me, but this Christmas seems a bit more 'manic' than previous Christmases, though that might simply be the end of the recession (for some) and people enjoying a bit of a 'blow out' after all the lean years.  Or it might be that the continued substitution of the secular for the sacred in our post-Christian society makes us even hungrier for shared experiences of belonging and transcendence - even if it is in a shopping centre.

But don't get me wrong - I'm glad for the retailers that they are having a 'good' Christmas after all they (and we) have been through.  Still, we should beware the dangers of our new secular liturgies.  As Arthur C. Brooks suggests, we should celebrate abundance but avoid attachment.

Easier said than done, of course.  I personally don't see the need for a new range of Louise Vuitton handbags, but a new iPhone 7 would undoubtedly be an historic step forward for all mankind. Though womankind might beg to differ...

Posted by Gerard O'Neill at Thursday, December 18, 2014 No comments:

The year is ending with a bang rather than the usual seasonal whimper. The cold war on Russia has warmed up via the foreign exchange markets. And mass murder came to a school in Pakistan this week. Meanwhile back in Ireland the 10 year sovereign bond rate has fallen to its lowest level ever: 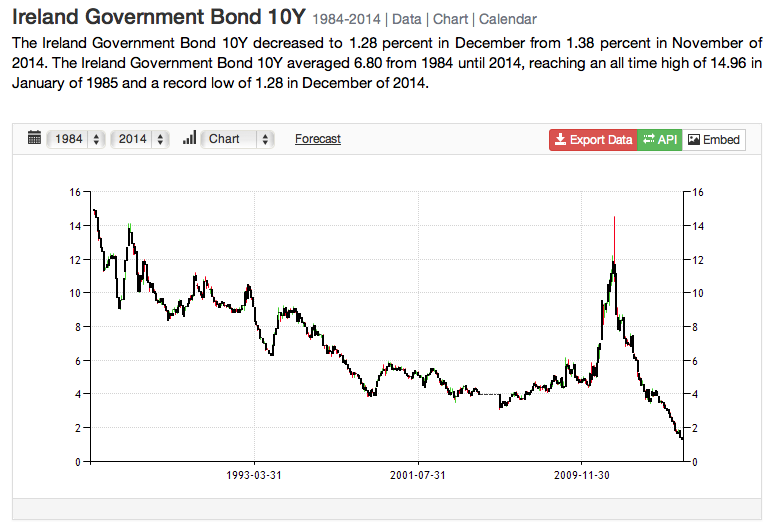 We're in good company: half of all the government bonds in the world yield less than 1%.  Apparently investors are spooked by what's happening to everything else (stocks, commodities, you name it). Could it change? Sure, the Russians increased their interest rate to 17% from 10.5% overnight. Though that's the kind of interest rate increase nobody wants right now.

On the other hand, Andrew Haldane thinks low interest rates could be with us for the next 40 years or so. Which is fine if you are a borrower - but not so good if you are a bank: Europe's commercial banks will be crushed if that continues.  It doesn't look like we're about to escape the gravitational pull of the zero interest black hole any time soon.

Still, at least we'll have a few referenda to distract us from our predicament next year, though events abroad might prove even more distracting in the meantime.

Posted by Gerard O'Neill at Tuesday, December 16, 2014 No comments:

None of The Above

The rise in support for 'Independents' in recent opinion polls (now at 32% in the latest Irish Times poll), is another Irish solution to an Irish problem. So what is the problem? In short, we don't have the equivalent of UKIP. There isn't a political party/leader articulating the frustrations, fears and preferences of a large section of the Irish electorate: so instead we get a siren chorus of Trotskyists with backing vocals by a few celebrity Independents - lots of noise, but little leadership.

Of course, the key word is 'equivalent' when it comes to UKIP. Ireland doesn't have the same issues (or should that be 'obsessions') with membership of the EU and with immigration (especially from outside the EU) that vexes so many in the UK and has undoubtedly helped the rise of UKIP. So there's no future for a party in Ireland that simply lifts the UKIP agenda and tries it here. But we do have something of the same experience of alienation from the democratic process that many have felt across the water. That alienation, however, has little to do with the Left-Right political spectrum beloved of so many Irish political correspondents who hope that - finally - we might be a General Election away from a 'real' choice between left-wing and right-wing parties. I don't see it myself.

Instead I am thinking of the alienation David Goodhart describes between Metropolitan Liberalism - dominant in the media, academia and mainstream political parties - and Popular Liberalism - dominant among those who prefer 'None of the Above' when it comes to the very same mainstream political parties. Goodhart has written a fascinating paper for Demos on the subject, and his recent talk at Theos expands further on the themes in his paper. In his Theos talk, he presents a check list on what differentiates Metropolitan Liberals from Popular Liberals along seven key political dimensions, which I've captured it in the chart below (note, it's my derivation of his check list from the audio track, so any errors are mine): 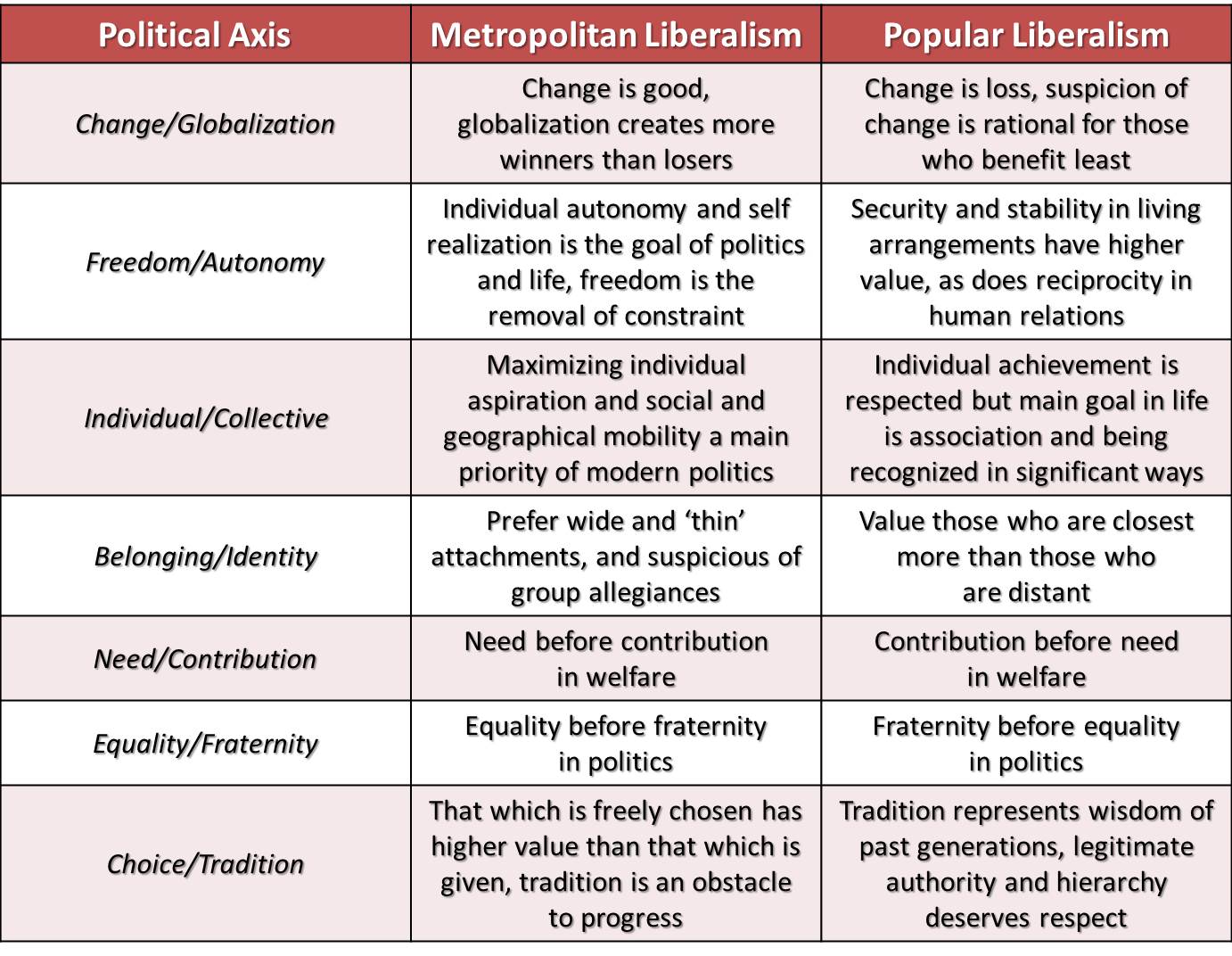 Goodhart quite explicitly sees the rise of UKIP as a result of the failure of mainstream UK parties to articulate and champion the values of those who are Popular Liberals. On a wide range of broad political and economic issues, there are fundamental differences in the values that drive the elite and drive much of the electorate on issues such as welfare, mobility, freedom and belonging. It isn't all, or even mostly, about immigration and the EU.

I believe something similar is happening in Ireland. A great many people in Ireland (away from the self-reverential bubble that is the Dublin media landscape) are deeply disaffected by what is happening to the country - economically, socially and culturally. And it isn't all about 'blaming the government' or water charges. They have no voice, or so it seems, and in the absence of mainstream leaders articulating their worries and wants they grab hold of whomever else feels like they might do the job. The rise of the Independents is our UKIP moment. Whichever party (existing or new) grasps the Popular Liberal agenda will enjoy something of the same success as Nigel and the 'Ukippers'.

Next year's General Election in the UK will probably inspire some to try it...