The Russians Are Coming

The recent alarum about Russian military aircraft entering Irish airspace has all the hallmarks of a good old-fashioned, reds-under-the-bed panic.  Yes, I've heard it all before because there seems to be a perennial need to paint Russia and Russians as 'The Other', to be feared, suspected and contained.  Albeit with a brief lull after the fall of the Soviet Union.

We even see it in reports on the conflict in Ukraine (the separatists are always 'Russian-backed' while the Ukrainian military are apparently operating all on their own). Even the BBC is resurrecting The Russians Are Coming commentaries on the deceptive and manipulative practices of the Russian military (or Maskirovka as it's known).  I don't doubt the Russian's are practicing maskirovka in Eastern Ukraine, and I don't doubt NATO are too.

Another advantage of growing older is the ability to step back and see the bigger picture (or to at least try and see it).  Understanding history can help, so can psychology.  Take the peculiarities of the Russian National Character, delineated by Dmitry Orlov:


Russia has a long history of being invaded from every direction, but especially from the west, and Russian culture has evolved a certain mindset which is difficult for outsiders to comprehend. First of all, it is important to realize that when Russians fight off an invasion (and having the CIA and the US State Department run Ukraine with the help of Ukrainian Nazis qualifies as an invasion) they are not fighting for territory, at least not directly. Rather, they are fighting for Russia as a concept. And the concept states that Russia has been invaded numerous times, but never successfully. In the Russian mindset, invading Russia successfully involves killing just about every Russian, and, as they are fond of saying, “They can't kill us all.” (“Нас всех не убьёшь.”) Population can be restored over time (it was down 22 million at the end of World War II) but the concept, once lost, would be lost forever. It may sound nonsensical to a westerner to hear Russians call their country “a country of princes, poets and saints,” but that's what it is—it is a state of mind. Russia doesn't have a history—it is its history.

Rather than demonise Russia the West needs to work with it on the task of building a more stable world order - taking Putin's offer in his speech at Valdai seriously - rather than escalating matters further.  Moreover, Russia's improving demographics will make it more important to the West rather than less important.

Perhaps there is a role for neutral Ireland in turning the European Union away from a path that seems set on conflict (one that will involve us in more than just airspace infringements).  Given some of the similarities between the Irish and Russian national characters we might even be ideal for the job.

Such a role will recognise the alignment of long term interests between Europe and Russia and will call on both Russians and Europeans to live up to the high ideals they both espouse but increasingly ignore.

Posted by Gerard O'Neill at Saturday, January 31, 2015 No comments:

Much of the analysis since has focused on freedom of speech.  It's an important issue - even if the previously narrow Overton Window would have seen Charlie Hebdo banned in the UK - but I don't think it's the main issue.  The real issue is one of values: freedom of speech is merely a derivative of higher order values. Moreover, it is about a clash of values: Islamic, Secular and Christian.  George Friedman spells out a grim dilemma facing Europe:


Something must be done. I don't know what needs to be done, but I suspect I know what is coming. First, if it is true that Islam is merely responding to crimes against it, those crimes are not new and certainly didn't originate in the creation of Israel, the invasion of Iraq or recent events. This has been going on far longer than that. ...Nor is secularism about to sweep the Islamic world. The Arab Spring was a Western fantasy that the collapse of communism in 1989 was repeating itself in the Islamic world with the same results. There are certainly Muslim liberals and secularists. However, they do not control events — no single group does — and it is the events, not the theory, that shape our lives.

Europe's sense of nation is rooted in shared history, language, ethnicity and yes, in Christianity or its heir, secularism. Europe has no concept of the nation except for these things, and Muslims share in none of them. It is difficult to imagine another outcome save for another round of ghettoization and deportation. This is repulsive to the European sensibility now, but certainly not alien to European history. Unable to distinguish radical Muslims from other Muslims, Europe will increasingly and unintentionally move in this direction.

If indeed events shape our lives, what else might happen to shift the window in Europe's debate about Islam and immigration?  The biggest one that I can see is the collapse of Saudi Arabia. After all, it is Saudi Arabia's funding for and export of Wahhabism that has done much to exacerbate Islam's problem with Islamist violence.  But if Nassim Taleb is right, Saudi Arabia ticks all the boxes when it comes to a country on the edge of fragility: including a centralised governing system, undiversified economy, excessive debt and leverage, a lack of political variability, and no history of surviving past shocks. It goes without saying, of course, that the collapse of Saudi Arabia wouldn't just cause problems for Islamist extremists...

But beyond the geo-politics, we need to bring the debate back to one about values in order to chart a way forward for a European politics of engagement, not appeasement.  And here I think is the biggest problem for Europe.  We can spend more on security, spy on ever more suspects and police our borders more effectively,  but the fundamental question will remain unanswered: what are the values of Europe's majority and why are they superior to those of an extremist minority?

If Kierkegaard is right - that truth always rests with the minority because the majority have no opinion - then there may not be an answer because the majority no longer have any shared values of their own.  To Friedman's point, Europe's cultural DNA is built around quite distinctive values: a fusion of Greek, Roman and Christian insights into what makes a flourishing society and economy.  As Deirdre McCloskey explains it, Europe's Great Enrichment was thanks to the 'seven virtues' of Prudence, Temperance, Courage, Justice, Faith, Hope & Love - the first four from the ancient world, the last three from Christianity.

But we have lost our philosophical, ethical and moral connection with these core virtues - and unless we recover them then a flourishing society and future for the West will keep receding over the horizon. Or, as Kierkegaard warned, the majority will 'in the next instant (when it is evident that the minority is the stronger) assume its opinion, which then becomes that of the majority, i.e., becomes nonsense by having the whole [mass] on its side, while Truth again reverts to a new minority.'

Islam is not the only minority faith in Europe - so also is Christianity throughout much of the continent (ignoring 'cultural Christians'). So there are several 'minorities' contesting for Europe's future. Charles Taylor sees the future as a three-way contest between secular humanists (the dominant orthodoxy in Europe for now), neo-Nietzschean antihumanists (they haven't gone away you know), and acknowledgers of transcendence (mainly Christians but also Muslims).  As Taylor sees it, any pair can gang up on the other, so expect to see increasingly strange coalitions as the Overton Window both widens and shifts in the months and years ahead. 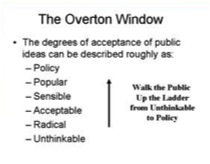