This I didn't know:


In 1933, on the Japanese island of Izu Oshima, a twenty-one-year-old student named Kiyoko Matsumoto jumped into the volcano of Mount Mihara from an observation point overlooking the molten lava. Her death became a media sensation across Japan as newspapers reprinted her poignant suicide note and turned her into an overnight celebrity. Nine hundred forty-four people subsequently jumped into the volcano’s crater in 1933 alone. In the years that followed, thousands more made the one-way trip to the volcano, including, every year, dozens of suicide-pact couples who plunged into the lava together. The Tokyo Bay Steamship Company set up a daily line to the island’s volcano rim, which became known as “Suicide Point,” to ferry victims and spectators: Some passengers bought one-way tickets to the destination, while others traveled there round-trip to watch people jump. This suicide epidemic ended only after officials made it a criminal offense to purchase a one-way ticket to the island and placed a barrier at the observation point.

From a powerful essay on assisted suicide and euthanasia by Aaron Kheriaty.   The point is that ideas are contagious, and that bad ones often spread faster than good ones, until they are stopped.  The recent Irish Times finding that 54% of adults agree there are circumstances where they would help a family member to die reveals the extent of one particularly bad idea.  Though younger adults are much more in favour than older adults for some reason.

Xavier le Pichon - who knows something about volcanos as he developed the theory of tectonic plates - has a different take: he thinks we need to welcome suffering as a sign of our humanity, and to see human fragility - like nature's - as something positive.

In the meantime, the rough beast that is the 'culture of death' keeps slouching forward.  It even has its own soundtrack:

Some people think all religions are the same; typically people who don't believe in any religion themselves.  I'm beginning to think the same about politics; all political parties are the same.  After all, politics is about securing power for the purpose of creating a better life for those who support you.  Communists think life will be better without rich people, and fascists think life will be better without communists.  But they - and liberals, socialists and conservatives in between - earnestly think that life will be better for others when they achieve power.  Sort-of-all-the-same: perhaps I'm having a crisis of (political) faith?

Which brings us to RENUA (they seem keen on the capitals by the way, judging by their website). Given that nowadays the Overton Window in Irish politics ranges all the way from slightly left-of-centre to extreme-left-of-centre then it's obvious that what Ireland needs right now is... another left-of-centre political party.  Not, of course, that you will have gathered that from the chorus of disapproval that greeted the launch of RENUA last week.  No, instead we're warned that RENUA is in the business of bashing the public sector and - you might want cover the children's eyes here - is nothing more than re-heated Progressive Democrats. The horror.

I don't read it that way. Their Vision & Core Beliefs could grace the manifesto of any mainstream Irish political party, with statements ranging from:

There is no greater moral and political issue than securing the future of children.
to:
We believe in creating the conditions that allow arts and culture to flourish.

One definition of a platitude is that stating its opposite sounds ridiculous rather than contrarian.  I hear a lot of platitudes.  Not so much Newspeak as Nuaspeak.

But in fairness I don't think that's the fault of RENUA.  Politics in Western democracies has become remarkably narrow and sterile.  The same set of left-of-centre beliefs are now orthodoxy in not just all the political parties but also in the media, academia and the wider commentariat. Witness the hysterical reaction to Nigel Farage in the UK. He refuses to comply with the new orthodoxy and they hate him for it. Partly it's the Krauthammer Effect (conservatives think liberals are stupid, but liberals think conservatives are evil), and partly it's because - for the left - politics is their religion and government is their god.  Death to the infidels and all that.  Come to think of it, maybe there's no difference between religion and politics, never mind between different religions and different parties?

Still, I can't help feeling that RENUA has missed a trick.  The whole idea of dissent in politics (and religion, for that matter) is to signal to other potential defectors (and Lucinda is, don't forget, a 'defector') that there are lots of people just like you who are unhappy with the status quo and who deserve to be in power rather than the incumbents. This requires a rallying cry which signals that those in power are insufficiently [fill in the blank here] and that if you gain power then you will resolve to undo/do better whatever [fill in the blank] is at stake.


More likely than not, some members of the ruling coalition are not very loyal. They’d rather defect. But they can’t backstab the coalition just like that. You don’t do that; it looks bad. Your comrades will go against you. There are costs to defection.

Unless you’re not the only defector. You need a way to signal your intention to defect, so that other disloyal fucks such as yourself (and they’re bound to be others) can join up, thus reducing the likely costs of defection. The way to signal your intention to defect is to come up with a good excuse. A good excuse to be disloyal becomes a rallying point through which other defectors can coordinate and cover their asses so that the ruling coalition doesn’t punish them.

... At any rate, the whole point of the above is to signal your disaffection from the status quo. The precise content of your signal is irrelevant. It is completely dependent on the particular ideological ecology of your culture. But the underlying mechanism is the same. You want power, and you signal your intent in the optimal way to minimize the chances of official punishment, and make it easy for others to join your banner.

The problem is, I don't see what the big [fill in the blank] rallying cry is for RENUA. And 'transparency' won't do it - too easy for others to steal. No, they should either have gone far more left than any of the mainstream incumbents - though it's a pretty crowded pitch, as noted earlier - or a little more right (mindful of the Window): a very empty pitch.

In the end, it would take a Frank Underwood to lead yet another left-of-centre political party to power in a political landscape that's full of them. But Lucinda Creighton is no Frank Underwood, and I mean that as a compliment.

The old joke goes that left-wingers love humanity but hate people; whereas right-wingers hate humanity but love people.  Jean Vanier loves both, and is a deserving winner of this year's Templeton Prize.  Vanier is a Catholic philosopher and founder of the L’Arche communities for the mentally disabled. There are over 130 L'Arche (French for Ark) communities throughout the world - including here in Ireland.

Vanier reminds us that we are all vulnerable at some stage in our lives (especially at the beginning and at the end) - a reality of human existence that binds us all together as human beings.  And while that can be a frightening realisation, it can also be extraordinarily powerful in calling us to live loving, flourishing lives.

But enough of my ramblings - let the good, goodly, Godly man explain it himself:

A recent trip to Milan got me thinking about babies.  The lack of them, that is.  Italy's birth rate recently reached its lowest level since the foundation of the state in 1861, and the Italians are worried that their country is dying.  Even Pope Francis has quipped that Italians seem to prefer pets to children.  Though on the strength of a few days in Milan I'd say it's still 50/50. 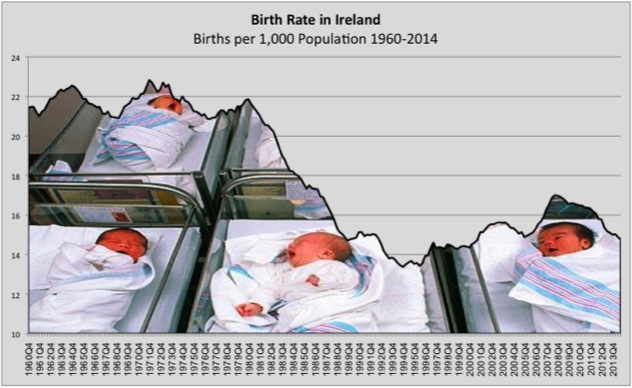 Still, the baby issue is going to be big.  Or smaller, to be precise.  We've reached Peak Children apparently, which means there'll never be more children alive than there are today. Which I find kind of sad, but that's probably just me being sentimental.  Still, there are a few downsides to falling birth rates, including:


There are a few upsides, of course:


But while all these trends and projections make for interesting speculation, they are mostly exercises in extrapolation.  I think a more interesting exercise is to think about the cultural consequences of a world that has more elderly people than children.

One of the most interesting writers on the psycho-cultural aspects of demographic transitions is Sarah Perry.  Her magnificent essay on The History of Fertility Transitions and the New Memeplex was one of the smartest and most original blog posts I read last year. As she explains it, historically European culture prevented people from restricting family size within marriage.  But a new pattern, originating in New England and France in the late eighteenth century, allowed for the control of fertility within marriage and pretty soon (within a couple of centuries) became the norm. Hence Peak Children.  As she notes dryly:


Once the fertility transition to controlled fertility occurs in a population, its fertility generally continues to decline until it is below replacement. The benefits of the new pattern are increased material wealth per person, a reduction in disease, starvation, and genocide, and upward social mobility. The main drawback is the onset of a dysgenic phase that may end civilization as we know it.

The end of civilization definitely counts as a downside in my book, and she does make her case rather well.  It's a long post, but well worth pouring yourself a drink and enjoying the read.  Though it does point to a few, rather more serious downsides to Peak Children: