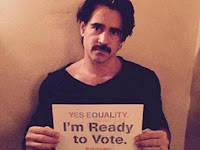 Ireland's referendum to redefine marriage is nearly over. The campaign will - I suspect - be pored over for years to come in relation to social change advocacy and resistance to same.

But I think it will also be remembered for the extraordinary way in which the campaign became a platform - albeit for the Yes side - to very publicly signal one's voting intentions, secret ballot be damned. So a lot of 'Tá' badges and stickers, 'Níl' badges not so much. Kim would certainly approve.

I recently came across a name for this, it's called Virtue Signalling and has been used to describe the surprise outcome of the recent UK election and the emergence (if that's the right word) of the 'Shy Tory' voter. According to James Bartholomew, virtue signalling is all about using what you say and how you say it to indicate to others that you are 'kind, decent and virtuous', and those with whom you disagree are the very opposite.

So in the UK, attacking the Daily Mail, Nigel Farrage and the Conservatives is all about signalling that you are nice because they are nasty. Bartholomew laments:


There was a time when Britain had a form of Christianity in which pride was considered a sin. Maybe that is part of why some of us find all this virtue signalling obnoxious. It’s just showing off. For some of us it is both ridiculous and irritating that people who say that they hate Ukip actually believe they are being more virtuous than others who visit the sick, give money to charity or are kind to someone lonely. But the widespread way in which people now proudly boast suggests there is no shame, no reflection. And because of this lack of awareness, it is more common. Twitter lends itself very well to virtue signalling, since it is much easier to express anger and scorn in 140 characters than to make a reasoned argument. Russell Brand is perhaps the ultimate incarnation of modern virtue signalling. He is bursting with anger and outrage. My goodness he must be good!

Robin Hanson, who has practically made a blogging career out of writing about signaling (the American spelling), recently defined signaling/signalling thus:


More generally I call a message “signaling” if it has these features:

It is not sent mainly via the literal meanings of words said.
It is not easily or soon verifiable.
It is mainly about the senders’ personal features, perhaps via association with groups.
It is about sender “quality” dimensions where more is better, so senders want others to believe quality is as high as possible, while others want to assess more accurately. Such qualities are not just unitary, but can include degrees of loyalty to particular allies.

Cheap talk cannot send a message like this; one cannot just say such a thing, one must show it. And since it cannot be verified, one must show it indirectly, via how such features make one more willing or able to do something. And since willingness and ability track costs, these are “costly” signals.

This is one reason why celebrities - from Colin Farrell to Russell Brand - are now feted for their opinions on everything from same sex marriage to global warming, it signals group association and encourages others to do the same.

But there is a darker side to all this, experienced in every totalitarian country. Frank Furedi observes (also in the context of the recent UK election) that the opposite of virtue signalling - the spiral of silence - has been with us since long before twitter and Facebook:


The pressure to conform and the fear of social isolation can lead to what the German social scientist Elisabeth Noelle-Neumann identified in 1974 as a ‘spiral of silence’. According to this theory, people’s assessment of the opinions held by the majority influences and modifies the way they express their own views. Some individuals feel anxious about expressing sentiments that differ from the consensus outlook, as expressed in the political and media realm, and it is thought that, ‘prompted by a “fear of social isolation”’, some are ‘less likely to express their own viewpoint when they believe their opinions and ideas are in the minority’. Typically, the fear of negative social sanctions influences the way people express attitudes about numerous morally charged ‘threats’, such as foreigners, crime or terrorism.

Coming back to the referendum, Brendan O'Neill thinks the 'spiral of silence' in Ireland has become something of a vortex. As he sees it:


Irish opponents of gay marriage aren’t only encouraged to feel shy — they’re encouraged to feel shame... Heaven help anyone who says No to this flinging open of marriage to same-sex couples. For the extent to which Ireland’s political and media elites have lined up behind gay marriage ahead of the referendum is nothing short of breathtaking. I’ve racked my brains, and I can’t think of any other political issue in Europe in recent times on which the consensus has been so suffocating, and so hostile to dissent.

There’s a profound irony here: Ireland’s political class calls for a Yes vote to prove that Ireland has moved on from its intolerant religious past, and yet some of that old intolerance is being rehabilitated by the very people backing gay marriage. They shush dissent and demonise their opponents as effectively as any priest used to do, only in the name of Gays rather than God. Backing gay marriage has become, in Irish Independent columnist, Eilis O’Hanlon’s words, a way for influential people to ‘identify [themselves] as members of an enlightened elite’, ‘kindly metropolitan liberals versus nasty Catholic conservatives’. This referendum is now only ostensibly about gay marriage: more fundamentally it has become a means for a new, PC, post-traditionalist elite to distinguish itself from the allegedly hateful and gruff inhabitants of Ireland’s more rural, old-fashioned communities.

Signalling again. But with an added viciousness that lands us in an Orwellian world in which - as Edward Feser explains - those who disagree with the new orthodoxy are no longer tolerated... in the name of tolerance!

Where it goes from here is anyone's guess. It does also depend on the outcome, of course.  Fianna Fáil (the gift that keeps on giving... to Fine Gael) have missed their last opportunity to secure and expand their core constituency in Ireland which would have followed if they had taken a pragmatic, perfectly reasonable (in the eyes of many) stand against redefining marriage (for any number of reasons: 'it's too soon', 'let's wait and see' etc etc). But they didn't, and the rest - including Fianna Fáil - is history. Needless to say, that's the very expensive version of signalling, and best avoided if possible.

So back to the outcome: do exercise your dearly won democratic right to vote, whichever way you intend voting. Go vote even if the privacy of the voting booth affords no signalling value - after all, there are more important things in a democracy that hopes to remain one.