"What discords will drive Europe into that artificial unity—only dry or drying sticks can be tied into a bundle—which is the decadence of every civilisation?" A Vision, William Butler Yeats

The bundle of sticks Yeats was referring to back in 1937 was of course the fasces, an ancient symbol that subsequently gave us the word fascism, then on the rise in Europe. Today, Europe's decadence - and Greece's tragic demise - is now tied up in another artificial union that is sure to fall apart.

Greece - and the rest of the European Union - should have spent the past five years helping Greece depart the euro. Instead, the artificial unity has been preserved at all costs, and to Ireland's shame we have been playing the part of Germany's loyal Rottweiler in the negotiations, ignoring Germany's own history of debt forgiveness.

The Greeks are far from blameless in this sorry saga: after all, they still manage to spend 2.2% of GDP on defence, far above the EU average and enough to pay for much of the pension and other spending they are now obliged to cut. Though it may be the price of keeping the Colonels happy.

Someone - a Greek as it happens - once said that there is no such place as Greece. The Greek mindset is in a sense 'pre-nationalist': more focused on regional, party and tribal loyalties. Hence the general antipathy to paying taxes. A bit like Ireland until at least the 1980s come to think of it.

But Greece - and the rest of Europe - deserves better than this shoddy treatment of a people whose ancestors gave us much of what makes us Europeans. There's only one thing a bundle of dry sticks is good for, as Yeats witnessed only a few short years after penning his prophetic words.

HT The Archdruid Report for the Yeats quote - I hadn't come across it before.

The Happiness of Science 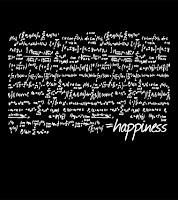 For the scientist who has lived by his faith in the power of reason, the story ends like a bad dream. He has scaled the mountains of ignorance; he is about to conquer the highest peak; as he pulls himself over the final rock, he is greeted by a band of theologians who have been sitting there for centuries. Robert Jastrow


I hope it's not a leading indicator (of the inverse kind) but there seem to be an awful lot of articles about the science of happiness recently. Whether it's 'well-being', 'happiness', 'quality of life', or 'life satisfaction' it appears that scientists are determined to come with a definitive formula for happiness at the level of individuals and even entire countries. I wish them well.

Social scientists have led the quest, though an awful lot of what they add involves slightly suspect analyses based on correlations between existing data series that were never designed to measure well-being or happiness in the first place. Case in point: Boston Consulting Group's Sustainable Economic Development Assessment or SEDA. Well-being is linked to an amalgam of indicators and sub-indicators under the headings of economics, sustainability and investment. Like a great many similar composite measures the choice of indicators seems to be partly a matter of what is readily available (and reasonably up-to-date) overlaid with a narrative about why a particular combination of indicators and themes best explains (or even predicts) a variable such as well-being or satisfaction. This despite the fact that many of the composite indicators are highly correlated with one another and don't really add an awful lot by way of explanation once the impact of, say, GDP per capita is taken into account.

The World Happiness Report does go further, using Gallup poll data from 156 countries (including answers to the Cantrill Ladder question which asks respondents to think of a ladder, with the best possible life for them being a 10, and the worst possible life being a 0, then to rate their own current lives on that 0 to 10 scale). The report then uses regression analysis to establish what explains the differences between countries in their Cantrill Ladder averages, finding that it's a function of variables such as GDP per capita, life expectancy, and answers to other poll questions about social support, corruption etc. Ireland ranks 18th, by the way, well below Israel in 11th place - go figure.

More recently, a major study on quality of life in Europe - based entirely on surveys - showed that variation in overall life satisfaction across Europe can be explained by a range of factors, including subjective perceptions of finances, environment, health etc. Only problem is all the subjective perceptions are highly correlated. A simple regression analysis of the average data for all the countries in the survey shows that subjective satisfaction with accommodation 'explains' more than 80% of the variation in life satisfaction, ignoring all other factors. Correlations again.

But leave it to the medical profession to get to the heart of the matter: according to the Mayo Clinic science tells us that purpose, gratitude, living in the moment and being with loved ones is the true source of happiness. Who knew? And yet, and yet... I can't help feeling that much of what passes for the science of happiness is unhappy science. If nearly half the scientific literature may simply be untrue (and that's according to The Lancet), then we need to take happiness findings with a large dose of skeptical salt. Even Daniel Kahneman, the grandfather of happiness research, thinks that 'a train wreck is looming' for the behavioural sciences never mind the 'hard' sciences because of shoddy research methods.

But it goes beyond research methods and mundane correlations. There's a worrying ideological slant to much of the research. Jonathan Haidt - himself a self-described liberal - thinks that academia's liberal bias is killing social science. Take some of the studies referred to above. The World Happiness Report doesn't mention religion once as an influence on happiness (though the word pops up twice in the title of referenced articles). The EU report on quality of life doesn't mention religion at all (despite long expositions on the meaning of life), though in fairness the word 'spirituality' does appear once in a footnote. The EU report does, however, have lots to say about GPG - or Gender Pay Gap. Which is odd because, despite numerous references to the evil of GPG (and the even more remarkable failure of entrepreneurial business people to set up 'women only' businesses to take advantage of the apparent gap), it doesn't explain why it adversely affects quality of life and life satisfaction in Europe (possibly because the same report tells us that women have a slightly higher life satisfaction than men?)

In fact there is considerable evidence for the hypothesis that religious people are happier on average than non-religious people, and it appears to have something to do with, well, religion. But that doesn't fit the 'liberal frame' and so is completely ignored. Which is a pity really, as it would make for a better science of happiness, and even for more happy scientists wishing to avoid the disappointment Robert Jastrow anticipated.