Today's Quarterly National Household Survey is a sobering reminder of just how far we still have to go to 'get back' to the way things were before the crash. Take, for example, the employment rate, i.e.: the percentage of adults aged 15 and over in employment expressed as a percentage of the total adult population (the CSO excludes over 75s from the denominator, as is normal international practice, but I think they need to be included as there's going to be a lot more of them in future).

The chart shows the trend since 1998 up to the end of last year: 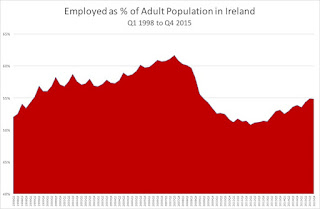 Rising is better than falling, but at the present rate of recovery it will be 2022 before the employment rate returns to its 2007 peak. But it isn't going to happen.

A few factors will stop the employment rate returning to a level above 60% anytime soon, including:


Which all adds up to a very different future to that envisaged in some of the 'fantasy politics' debates about 'fiscal space' that we've been subjected to in recent weeks.

General Election 2020 will be a lot more combustible than 2016, and fiscal space will be the least of our concerns.