Brexit is shaping up to be a closer run thing than the Scottish Referendum. That said, I find it amazing how much the 'debate' is still cast in terms of 'better off/worse off' economic conjecture, when experience shows that most speculations about the positive (or negative) economic consequences of this decision or another are almost invariably wrong, often orders of magnitude wrong. So I take all the economic forecasts from both the In and the Out campaigns with a large pinch of salt. They simply serve the task of reassuring their own supporters that they have made the 'smarter' choice.

Anyway, I think the more interesting campaign is the one about Identity. As Scott Adams keeps reminding us in relation to Trump's campaign, arguments based on Reason are useless (though marginally less worse than arguments based on Definition) - here's the Persuasion Stack as he calls it: 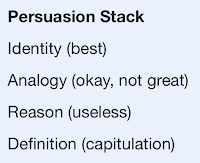 Arguments based on Analogy are better, but arguments based on Identity are best. The Brexit campaign - when everyone finally tires of even more ludicrous prophecies of economic doom following Brexit (i.e.: persuasion by Reason) - will give way to one about Identity (as it already has in some quarters).

But the big question is which 'Identity'? In a polity as complex as the United Kingdom, you can very quickly fall back down the persuasion stack to Definition, and then you lose. But it is a tricky one. As I noted  before on the Brexit topic, Old England is dying, and may already be dead. I mourn its loss, funny enough.

There is though another Identity worth revisiting. Frank Ferudi sees an opportunity to reclaim Europe from the EU, opening up the vista of a 'Real Europeans want Out' kind of Identity campaign. But it may be too late: the referendum is less than two months away (June 23rd), so unless Boris Johnson goes full Trump (not beyond the bounds...) then the debate may just remain at the level of Reason.

But whatever the outcome (for the record: if I was English I'd vote Out, but being Irish it suits me better if they vote In) the issue of Identity will keep coming back into focus, and not just in England and not in a good way either. Glynn Harrison has a superb essay on The Modern Crisis of Identity over at the Jubilee Centre, which raises even bigger issues than Brexit.

As he observes in the context of Western Civilisation's headlong rush into 'Identity-fluidity' and some of the pathological consequences that follow:


Issues of identity are relevant to the quality of relationships and our ability to form co-operative communities. Durable relationships depend upon the capacity to anticipate the needs of the other and to respond in predictable ways. This is especially important in families where stability and predictability are fundamental to the healthy development of children. Community is undermined as well if individuals are constantly in flux. And where an individual’s sense of worth is constantly at stake, empathy towards others is reduced: few emotional resources remain available for others when so much care and attention needs to be expended upon oneself.

If Identity politics circles right back to Definition then we all lose - as we're witnessing in a growing number of European nations, and even back home here in Ireland.