Whilst things have taken an interesting turn across the Irish Sea (Peter Hitchens speculates the UK may have an early general election and even a constitutional crisis if there's a narrow win for Leave), it's what's happening across the English Channel that may matter even more to Europe's future (and Ireland's, come to think of it).

Yet another fascinating poll from YouGov, this time across seven EU countries including the UK, reveals a depth of negativity, pessimism and anger in mainland Europe that certainly took me by surprise. While I had heard about the recent air traffic controllers strike in France (about as seasonal and as welcome as greenfly), I hadn't quite grasped the very, very polarised mood in that country. There's even talk of another French Revolution and civil war. Way worse than greenfly.

The YouGov numbers are shocking: more than half of French adults feel their financial situation has worsened in the past 12 months (26% a lot worse), and nearly as many expect the situation to worsen again in the next 12 months (21% a lot worse). No surprise then that 80% of French people don't approve of their government's record to date, but maybe more surprising is that the Swedish, Germans, Finns and Danes aren't that far behind in their disapproval ratings either.

As for Brexit, the majority of Europeans in the poll expect that if Britain leaves then other countries will follow: 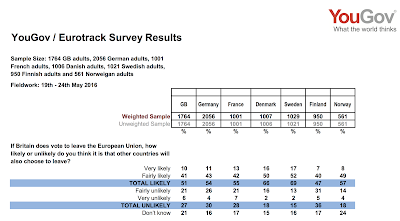 But back to France, what is going on? I recently read Michel Houellebecq's novel Submission - set in France's near future, 2022 to be precise - which paints a fictional picture of a country, even an entire civilisation, undergoing seismic shifts as a result of economic, social, cultural and religion strife. The focus is on the interplay between Islam and Laicité (France is reckoned to have the largest Muslim population in Europe, though it refuses to capture information about religion in its censuses).

What is clever about Houellebecq's novel is that he portrays Islam not as a revolutionary or radical force but as a conservative, even reactionary force in French affairs. The main Muslim political leader - Ben Abbes - is portrayed as one who is able to lead the national debate in a direction that the mainstream parties, nor his opponent the radical Tariq Ramadan, dare lead it:


Unlike his sometime rival Tariq Ramadan, Ben Abbes had kept his distance from the anti-capitalist left. He understood that the pro-growth right had won the ‘war of ideas’, that young people today had become entrepreneurs, and that no one saw any alternative to the free market. But his real stroke of genius was to grasp that elections would no longer be about the economy, but about values, and that here, too, the right was about to win the ‘war of ideas’ without a fight.

But Abbes takes the struggle for values in a new and different direction, as Houellebecq describes it:


Whereas Ramadan presented sharia as forward-looking, even revolutionary, Ben Abbes restored its reassuring, traditional value - with a perfume of exoticism that made it all the more attractive. When he campaigned on family values, traditional morality and, by extension, patriarchy, an avenue opened up to him that neither the conservatives nor the National Front could take without being called reactionaries or even fascists by the last of the soixante-huitards, those progressive mummified corpses - extinct in the wider world - who managed to hang on the citadels of the media, still cursing the evil of the times and the toxic atmosphere of the country. Only Ben Abbes was spared. The left, paralysed by his multi-cultural background, had never been able to fight him, or so much as mention his name.

France still has its soixante-huitards, of course, and no doubt they're active in the current discontent gripping the country. But the mood now gripping Europe - angry, anti-establishment and open to radical change - isn't confined to 'mummified corpses' and it certainly won't go away after the 23rd June.

It's going to be a long hot summer in Europe, though hopefully without the greenfly.