Today's poll results from YouGov are of historic importance. It looks like the British will vote to leave the EU later this month: 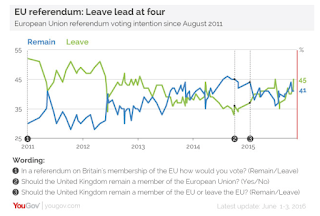 It's a huge poll - sample of 3,495 - and the detailed tables that accompany the article are fascinating (for those of us into that sort-of-thing). First of all, it isn't the British who will vote to leave, it's the English living outside of London. Moreover, I haven't seen such a stark generational divide in a set of opinion polls in a very long time: the majority of 18-25 year olds want to remain in the EU; the majority of those over 50 want to leave. Both men and women are more likely to vote Leave than Remain, but more women are undecided than men (not unusual at this stage in an election/referendum). So the women will be decisive (as they were in the Scottish Referendum).

Based on this poll - and the momentum evident in the Leave vote since YouGov's April poll, you'd have to say it looks like 'Brits Out' (sorry, couldn't resist it :)


One of the many famous moments of sporting history that the recently departed Muhammad “The Greatest” Ali was associated with was the “Rope-a-Dope” tactic, deployed against George Foreman during the “Rumble in the Jungle” bout in 1974. Foreman hammered Ali relentlessly for almost the entire fight. Ali stayed on the ropes absorbing the punishment, countering just enough to avoid a technical knockout. Everyone thought Ali was finished, and even his own corner, ignorant of his plans, despaired. Late in the fight, Ali stormed out and took the initiative against a shocked Foreman, who was by this time too exhausted to change tactics.

Something similar seems to have happened with the EU referendum campaign. The tactics of the Remainers were plainly to bludgeon the Leavers on the economy, supplying a blizzard of statistics (mostly false) and a line-up of heavyweight international figures all singing from the Remain hymn sheet. By this time, it was supposed to be all over: a dazed and confused Leave campaign would be on the ropes, still standing in name only.

It's going to go all the way to 12 rounds, and boy is it going to be a thriller.