What if the people voted to end democracy: would it be a democratic decision? We're witnessing a 'crisis of faith' in Ireland right now, and it'll probably get worse. It's a bigger story than 'the church in crisis' or 'the media in crisis', but it isn't getting the attention it deserves.

I've observed before that politics is sport for nerds, but the national interest in sport is looking a lot healthier. The latest Eurobarometer poll shows that Ireland is number six in the EU28 for our lack of interest in politics: 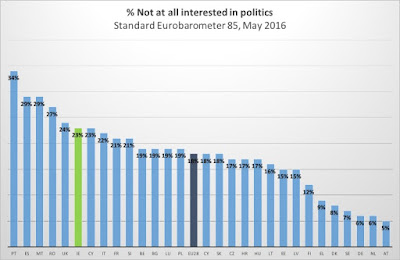 What's more, when we look at the results for Ireland in detail, we see that women, young people under 25, and the working class are the cohorts least interested in politics: 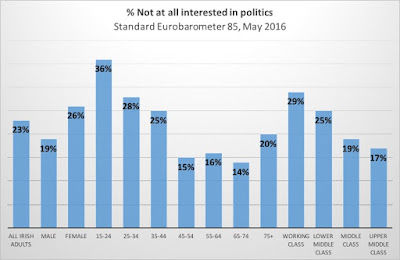 So what? The big 'So What?' is that there is growing evidence that younger generations in Europe and the United States are less and less enamoured with democracy, and aren't sure it's 'worth the effort' any more. A recent article by Roberto Stefan Foa and Yascha Mounk on The Democratic Disconnect drew on similar survey data and reached some very disturbing conclusions. Essentially they chart a strong growth in support for undemocratic political ideas (such as rule by the military) in many mature democracies, especially among the young.

Citizens of democracies are less and less content with their institutions; they are more and more willing to jettison institutions and norms that have traditionally been regarded as central components of democracy; and they are increasingly attracted to alternative regime forms.

Far from showing that citizens have merely become more willing to criticize particular governments because their expectations of democracy have grown, this indicates a deep tension at the heart of contemporary politics: Even as democracy has come to be the only form of government widely viewed as legitimate, it has lost the trust of many citizens who no longer believe that democracy can deliver on their most pressing needs and preferences. The optimistic view that this decline in confidence merely represents a temporary downturn is no more than a pleasing assumption, based in part on a reluctance to call into question the vaunted stability of affluent democracies.

Combine increasing scepticism about the efficacy of politics with a growing lack of interest in party politics and with a narrower and narrower definition of 'acceptable politics' and the stage is set for a very different type of politics. The type that doesn't see much point in people wasting time ticking boxes in booths every four years or so. There'll still be politics, of course, but there might not be democracy and I suspect a lot of people probably won't care...