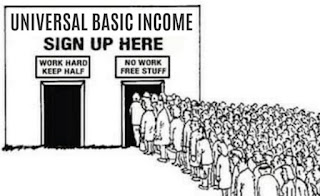 Those of a Lutheran or Catholic persuasion were treated today to the parable of the generous vineyard owner (Matthew 20:1-16), the one in which the owner pays the same wage to those who worked for an hour in his vineyard as those who worked all day.  The parable isn't about wages and incentives per se (the Girardian Lectionary explains the bigger picture, as usual); however, as an employer, I can't help thinking 'good luck getting anyone to show up for work in the vineyard tomorrow morning' every time I read the passage.

The same goes for the vogue idea of a Universal Basic Income. The idea has lots of support internationally across the political spectrum, and has been consistently championed here by Social Justice Ireland, with even Mark Zuckerberg coming out in favour of it.  Depending on which flavour you go for, UBI or BIG (Basic Income Guarantee) entails giving a regular amount of money unconditionally to every adult, paid for (possibly/maybe) by replacing existing social welfare payments and (possibly/maybe) means testing those with incomes from, well, jobs.  Plus a tax on robots, of course.

Much of the contemporary appeal is in response to the AI Apocalypse: if there are going to be fewer and fewer jobs in the future then the only way to sustain a consumer-spending based, capitalist economy will be to give the spending power directly to consumers.

The economic case for and against UBI continues to be debated: and will be for some time to come as a number of trial experiments in some countries and regions run their course.  I suspect something like it will be scaled in one or two countries in the next ten years or so, though even then there will remain considerable uncertainty about the economic, political and social impact for any country that embraces it fully.

Of course, you could argue that we've run a variation of this experiment in Ireland already: we have one of the lowest levels of labour force participation and highest ratios of households without incomes from employment in Europe. The negative impact of prolonged absence from the workforce on the psychological and even physical wellbeing of the long-term unemployed should give everyone pause for thought about 'expanding' that particular experiment.

But perhaps the biggest objection UBI as a solution to the problem of technological unemployment and even rising income inequality is that there are plenty of simpler, well proven alternative policies that would be less 'risky' to implement. Take job creation, for example. As Charles Hugh-Smith observes, we all want to live in a prosperous society and the best way to achieve that is to create conditions of abundant work and a low cost of living:

All of these things are getting harder, not easier in Ireland. As for a low cost of living, that isn't going to happen while Ireland (and most other nations it would seem) is gripped by The Cost Disease. Rising costs of housing, education, health and public services appears to be rampant across the developed world through an unholy combination of bureaucracy, lobbying, over-regulation, financialisation and all the other things that happen when powerful groups use their power to the detriment of the common good.

So making it easier to create jobs, and more affordable to take them, seems to me a fairly basic step to take before going down the Basic Income route. Nor is it just about business and job creation.  There's another solution to poverty and inequality that could do with a little more support: marriage.  Some have called it The Sequence, and it reflects the common sense observation that those families comprising parents who got employed before getting married before having children are significantly less likely to experience the problems of poverty, educational under-achievement and other social and economic ills.  It's not a panacea of course (nor is UBI for that matter), but it has just a little more in the way of a proven track record in modern societies than 'free money'.

Maybe there is a Catholic (and Lutheran) angle to all this after all. Pope Francis observed in his encyclical Laudato Si:


We were created with a vocation to work. The goal should not be that technological progress increasingly replace human work, for this would be detrimental to humanity. Work is a necessity, part of the meaning of life on this earth, a path to growth, human development and personal fulfilment. Helping the poor financially must always be a provisional solution in the face of pressing needs. The broader objective should always be to allow them a dignified life through work.

The real challenge of the future will not be how to pay for a post-human economy, rather it will be how to create meaningful sources of work that enable us all to be fully human. Perhaps a future in which we all own our own vineyard.