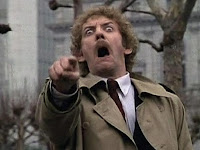 I know of no country in which there is so little independence of mind and real freedom of discussion as in America. Alexis de Tocqueville

Does anybody know a good medium? I'd like to let Alexis know I've found another country: our own little sceptic isle, of course.   Poor old George Hook, he was finished as soon as he apologised. George belongs to a generation who believe in the court of public opinion. Unfortunately for him, we now have a kangaroo court of public emoting, and there's no attorney for the defence.  Our democracy of opinion has, according to James Poulos channeling Paul Virilio, been replaced by a 'democracy of emotion'.  So to apologise to the kangaroo court is to plead guilty, and there is no reduction of sentence for plea bargaining.

Nowadays there appear to be two types of response to 'unacceptable' opinions: the first is 'point and sneer', the other is 'point and screech'.  Neither is particularly edifying (think Donal Sutherland in Invasion of the Body Snatchers), but both responses are quite effective at shutting people up: which is the whole point of course. 'Independence of mind and real freedom of discussion' don't come into it.

When even our Taoiseach manages to take a break from fixing the health crisis, the housing crisis and the Garda crisis to join in the chorus of opprobrium against George then clearly something is happening to the nature of public discourse in this country (and in others). The best contemporary guide to the new democracy of emotions is Byung-Chul Han, a Korean born German philosopher.  Han refers - very unphilosophically - to the 'shitstorm' as a description of what George is going through, namely the swarming of 'point and screech' hatred via digital and social media:


The individual acts of virtual outrage composing the shitstorm — the carping message board comment, the nasty tweet, or the backbiting post on Facebook — are not a prelude to engagement, but instead an occasion of “immediate affective discharge” in an environment that “favors symmetrical communication.” This means, in essence, that online condemnation responds less to the dialogic criteria of suasion than to the base pleasure of dealing a cheap shot — in many cases, under cover of anonymity — with no concern for whether the target is a stranger, a celebrity author, or the president of the United States.

But the problem with the shitstorm - certainly when it comes to bigger issues like, say, the health crisis, the housing crisis and the Garda crisis - is that it changes nothing:


Outrage... draws attention efficiently but lacks the stability and constancy required for successful intervention in the public sphere. Masses marshaled to the purpose of public shaming lack a commitment to a course of shared action. Outrage is an end in itself, and its targets are inevitably granular, so that the power relations that structure individual grievances at their core persist through the shitstorm unaltered.

What George Hook said was a clumsy, fatherly attempt at the 'stranger danger' talk many parents have given their young daughters, basically: 'avoid the scumbags' (his own word for the rapists in the news item he was discussing). But the shitstorm wasn't about scumbags, it was about George apparently blaming the victim, which he didn't. Which highlights something else about the moral panics that seize the media with increasing frequency, namely that: the issue is never the issue.  In other words, the furore over what Hook said or didn't said isn't about the crime of rape, rather it is about shutting up another 'right winger' with unacceptable views on same-sex marriage, immigration and a host of other, 'polygraph tests' for thoughtcrimes these days.

There were 2,549 sexual offences last year in Ireland according to, ahem, Garda statistics. An increase of 8.6% on the previous year. Did any of Hook's critics have anything to say about the dangers this highlights for women in Ireland in 2017? I didn't hear or see it. Instead, we were told that Hook's point of view was harmful to women on the grounds that it might discourage some women from reporting rapes. That's a point worth discussing (really discussing, not name-calling): but what's even more important to discuss is the harm done to women by rape - shouldn't that be the main issue? Specifically how to ensure that women are empowered to minimise the risks they face in a society in which sexual offences are on the increase?

Women (and men) would be better advised to listen to the advice of personal safety experts like Gavin de Becker - describing in life-saving detail what women should do to get out of dangerous situations in conversation with Sam Harris - than the 'point and screech' ad hominem attacks of the Irish commentariat caught up in the latest shitstorm.  But then if we did that, 'the power relations' might actually change, and who really wants that? 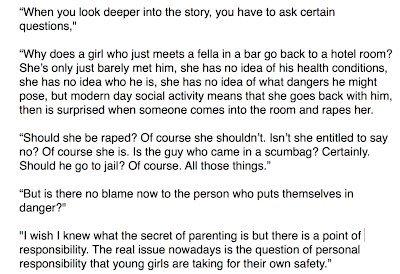