“The angels said, ‘O Mary! Allâh gives you good tidings through a word from Him. His name is the Messiah, Jesus, son of Mary. He shall be worthy of regard in this world and in the hereafter… ‘And he will speak to the people when in the cradle and when of old age, and shall be of the righteous.’ Mary said, ‘My Lord, how can I have a child when no man has yet touched me?’ He said, ‘In this way: Allâh creates what He will. When He decides something He simply says “be” and it is.'” Qur’an, Sura III


For lo! the days are hastening on,
By prophet bards foretold,
When, with the ever-circling years,
Shall come the Age of Gold;
When peace shall over all the earth
Its ancient splendors fling,
And all the world give back the song
Which now the angels sing..
It Came Upon a Midnight Clear

Will Brexit lead to a United Ireland? There has certainly been lots of speculation about such a prospect, though mostly south of the border. My company's poll for RTE Claire Byrne Live shows that more people in the Republic of Ireland want a United Ireland than don't - though not quite a majority.

More problematic - for those saying yes - isn't that Ulster says no so much as Leinster says no.  Just as it did when I first wrote about the 'Leinster Problem' back in 2010.  Not a lot has changed: the people of Dublin remain among the most hostile to the idea of a United Ireland, while those closer to the border are more positive.

Of course, the question 'do you want a United Ireland?' is a bit simplistic.  A more pertinent question might be 'are you willing to pay considerably higher taxes for a United Ireland?' (enough to fill the €11.5 billion gap should the British cut the north loose). That probably reflects some of Dublin's antipathy to the idea (after all, Dublin generates nearly half the Gross Value Added of the whole of Ireland, and pays a higher share of taxes): so Dublin would foot most of the bill for United Ireland as well.

Though it's not (just) about taxes: it's also about identity.  And let's be honest, most people in the Republic of Ireland don't identify with most people in Northern Ireland. The two parts of the island have grown apart, economically, politically, culturally and demographically in the past 100 years. The Republic of Ireland now exports more to Japan than to Northern Ireland, and twice as much to China as to the north.

But I'm not talking North/South Korean differences but a deeper, values-based set of differences. Something closer to David Goodhart's distinction between the Somewheres and the Anywheres.  Northern Ireland is still a place where place, history and flags still matter a great deal: making them a population of Somewheres (even though a majority voted against Brexit!)  The Republic of Ireland is increasingly a place of Anywheres: cosmopolitan in outlook, shaped by an open, globalised economy,  and by patterns of trade and migration.

Uniting such divergent cultural forces is a challenge for the UK right now in Goodhart's analysis, and it will certainly be one for Ireland if/when the two parts of the island come together. As someone who travels to and through Northern Ireland quite regularly, I certainly hope this week's events will mean that we keep a border that is - for all practical purposes - invisible. But the impractical distinctions of values and culture will continue to keep north and south apart for a very long time to come. 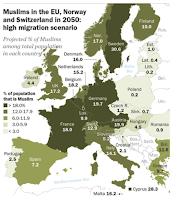 The latest report on Europe from the Pew Research Center takes a fascinating look at scenarios for Muslim population numbers in Europe in 2050. Their distinction between migrants and refugees - and the different profiles and patterns that go with it - is a valuable addition to the migration debate. I've blogged about Pew's religious research and forecasts before, and generally I find their analyses to be both reasonable and fair.

What makes their most recent report interesting is that it includes forecasts for Ireland. Under different scenarios for Muslim migration into Europe they show Ireland's Muslim population rising from 70,000 in 2016 to 200,000 in 2050 in the highest migration scenario.  Though of course not all the growth will be from migration (Irish Muslims will add to population growth themselves), and not all migrants to Europe will be Muslim.  And the overall population will grow too, hence the relatively low share of Muslims in the Irish population (4.4% in 2050) even in the high migration scenario.

Pew's starting point is actually a little high. The 2016 Census report on religion showed that there were in fact 62,000 Muslims in Ireland. Though over a 34 year horizon it probably wouldn't make that much difference.  The census doesn't differentiate between different Muslim traditions (Sunni, Shia, Sufi etc), though most likely the vast majority of Muslims in Ireland are Sunni (as they make up  approximately 85% of the global Muslim population). The census does however distinguish Muslims in Ireland by nationality: it turns out more than half of Muslims in Ireland are Irish nationals.  Half of the rest are defined as 'Other Asian', which is most likely Pakistan (for historic, cultural and family reasons). One of the biggest cultural (and family) connections is via the UK. Indeed, a recent BBC report highlighted the fact that over 40% of mosques in the UK are run by a specific traditional group from Pakistan called The Deobandis. I can only presume a similar presence in Ireland.

Which makes for another scenario not considered by Pew: one involving Brexit. In the event of a hard Brexit I wouldn't be surprised if a large number of Muslim migrants to the UK - and a much larger number of non-Muslim migrants - will look to Ireland as a better location for business, cultural and family reasons.

But perhaps the more interesting speculation is the impact on European culture, values and polities from some of the scenarios painted by Pew.  Ireland - like central and Eastern Europe - will be relatively unaffected by Muslim migration (and refugees) in any of the scenarios.  But France, Germany, Sweden and so on will undergo a much stronger impact. It doesn't have to lead to the type of seismic shifts envisaged by Michel Houellebecq, but it undoubtedly will lead to significant changes in the prevailing zeitgeist in Western Europe in particular.

As Nassim Taleb reminds us, it is 'intolerant' minorities (i.e.: those with 'stronger' values than the wider population) who get to shape the wider cultural milieu for the total population. One reason, he explains, why Coca-Cola is kosher (and therefore acceptable to Jews, Christians and Muslims).

But remember, scenarios are not forecasts: they are stories about what might come to pass, and therefore an invitation to ask ourselves how might we fare and respond in just such scenarios. I suspect we'll see a great many more such stories about the future in the years and decades to come.