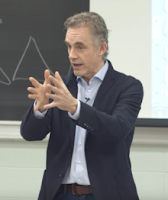 Jordan B Peterson is a latter day Martin Luther - or Savonarola, depending on your point of view.  He speaks truth to power, which makes him very brave and very unpopular with the powerful. I first came across him in November 2016 when he appeared on the Joe Rogan podcast (he's been back a few times since).

He has recently finished an epic, 14-part lecture series on the Book of Genesis (not quite the version I learned at St Patrick's Academy). Peterson sees himself as a 'Truth Warrior', standing up to the bullying Social Justice Warriors who would prefer he shut up and go away (as they do everyone who disagrees with them).

Though given his ability to speak passionately and engagingly for 2-3 hours at a stretch without so much as an 'em' or an 'um' then he isn't going to shut up or go away any time soon I reckon.

Tom Bartlett has penned one of the fairer introductions to Peterson the man. Meanwhile David Fuller has set out an excellent introduction to the breadth of Peterson's ideas.

Jordan Peterson - like Joe Rogan - has made YouTube his medium of choice, reaching millions through his talks and interviews far beyond the numbers who might read his books or catch him on TV. Like Luther 500 years before, Peterson is using new communications technology to get around the powers that be, i.e.: the Cultural Marxist thought police now in charge of the established, secular church in every English speaking country, including Ireland.

Jordan is very quotable. Here's one of my favourite quotes from one of his earlier podcasts:


"The purpose of life is to find a mode of being that is so meaningful that the fact that life is suffering is no longer relevant, or maybe that it's even acceptable".

And if that intrigues you then there's lots (lots) more where that came from.

Post script: Tyler Cowen reckons Peterson is one of the five most influential public intellectuals today. A 'Conversations with Tyler' featuring Jordan Peterson would be worth the two dialogue...