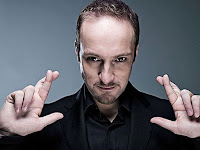 Have you ever been to a hypnotist? Usually at the beginning of the show, the hypnotist finds out who in the audience is most easily hypnotised by, say, getting everybody to clasp their fingers and hands tight together.  Then he tells you to release them, and if you can't then you're invited on to the stage. All good, clean fun.

But here's what I've noticed lately, we're all hypnotised more and more of the time.  If an audience was made up of countries, Ireland would be on the stage every night. That's not so good.

I've been learning about the work of Joe Griffin and Ivan Tyrrell, founders of the Human Givens school of psychotherapy.  There work is the most insightful and useful analyses of the human condition and human psychology that I have come across in decades. Joe Griffin has actually solved the millennia old question which asks 'why do we dream'?  If there was any justice he would get the Nobel Prize for Science - his work is that original and pregnant with potential for the future.

But one of the most interesting aspects of Joe's work with Ivan Tyrrell is how they apply their insights to the wider world.  Because it turns out that dreaming and hypnosis are variations on the same thing: both are triggered by the activation of REM activities in the brain, only one happens while you're asleep and the other while you're awake.

What is the trigger? The answer is: trance. As explained in 'Why We Dream':


"A trance is a focused state of attention, a state of utter absorption. Ad the most absorbing type of trance state we ever enter is a dream. Most people do not realise that when their attention is completely held, for instance by a riveting speaker or by a problem that they are focused on solving, or by an activity that requires exact precision (such as archery), the are in a trance state."

Hypnosis is simply any artificial means of accessing the REM/trance state whilst awake: and it takes very little (from a swinging fob watch to the ping of a message on your mobile) to enter that state.

So what's the harm?  In the case of a stage show there isn't any.  Okay, maybe if you're the hapless chap on the stage who ate the onion convinced it was an apple then not so good. But no big deal.  Indeed, Human Givens therapists use hypnosis to tackle a host of problems such as depression, PTSD etc.

What the Human Givens framework tells us is that the REM/trance state (asleep or awake) is how we learn. We start dreaming from the age of 7 weeks in the womb, and we don't stop even in very old age. In the REM state our brain lays down 'patterns' that are our guides to how we should navigate life and the world around us. This is mostly done through metaphors and stories that match innate patterns to lived experience - providing the greatest flexibility when it comes to the uncertainties we face in life.  Therefore all new learning occurs through pattern matching, and our brains are effectively programmed by nature "to take part in an endless quest for metaphor... recognising how something is 'like' something else is how the brain, moment by moment, tries to predict its best course of action".

Where all this becomes a matter of some concern is when an entire society is in trance for a growing part of the day, every day.  The defining characteristic of a trance state is a massive increase in susceptibility to suggestion, because your attention is focused and all wider environmental stimuli are ignored. Both Joe Griffin and Ivan Tyrrell worry about the adverse ways in which trance/hypnosis can be used:


Anyone who can focus their attention, who has a good imagination or who can become emotionally aroused, will, at many points in time, enter trance. We are in a self-induced trance whenever we are highly emotionally aroused in what is usually thought of as a negative way: anger, fury, hatred, fear, anxiety, worrying, depression, envy, greed, selfishness – all such emotions cut us off from our thinking brains and give us a locked-in, limited view of reality. The same is true when we are in thrall to conditioned belief systems that we cannot see beyond, whether those of religions, cults or politics.


Anyone who thinks hypnosis is harmless might do well to remember that Hitler studied it after being cured by a hypnotist of the hysterical blindness that he suffered at the end of the First World War. His personality changed at that point as the result of a strong suggestion given in trance by a psychologist who told him that he was special and that he had great personal powers and that, with these great powers, he could cure himself of the blindness. This acted as a post hypnotic suggestion and Hitler went on to induce receptive trance states in vast crowds at rallies, bombarding them with emotionally arousing nominalisations. He even adopted a stylised form of arm levitation as the Nazi salute.

What happens to a society - to a democracy - when a growing number of its citizens are spending more and more time in a self-induced trance?  Like 31 hours a 'day' (thanks to multitasking and dual-screen media consumption)? 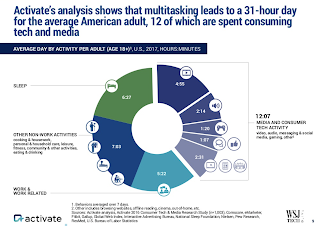 I noticed something recently: twice in one day, as I was driving through Dublin and stopped at the traffic lines, the 'green man' said it was okay for pedestrians to cross, but several of the younger ones just stood there.  They were staring at the 'black mirrors' in their hands, completely unaware of the change in the lights. Meet the Entranced Generation.  Though it isn't just the young ones.

Of course we all daydream, and most of us experience 'the common everyday trance' which occurs about every ninety minutes and lasts for about twenty minutes.  It's a great time for seeing the bigger picture, creative problem solving and composing works of art... or doing what more and more of us do more and more of the time: checking our email, Facebook, Instagram, news apps, and the myriad other 'distractions' we cram into our multi-screen days.  Distraction doesn't mean unfocused, by the way. 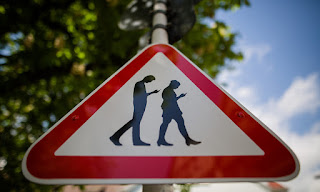 Still it begs the question: what's the harm? According to Griffin and Tyrrell, the pattern-matching, metaphor-making drive that makes us human - able to live in any society we're born into and to speak any language - can be put to more negative uses:


As well as being taught or programmed with socially and personally useful ideas and behaviours, we can just as easily be programmed with destructive ideas and thus create a sick society. If we misuse our daydream faculty - our imagination - we can condition ourselves into horrendous, neurotic reaction patterns... the misuse of our imagination is fundamentally involved in the generation of clinical depression, anxiety disorders, anger problems, psychosis, greed, cruelty and addiction.

Could this be why the level of political discourse in more and more countries is becoming more polarised and more extreme? Instead of the daily news we get the 'daily trance', one that lasts all day. Remember one of the things that triggers the trance state: strong emotions, especially negative ones ('anger makes you stupid' and all that).  Don't believe me? Two words: Donald Trump.  In our irrational 'emocracy' we are entrancing ourselves into a state of fury, of 'us and them', of sacrifice and scapegoats.

Here in Ireland we've been spared much of the political rancour and dissension that seems to be gripping a growing number of countries around the world. But could that be because we're the ones on the stage, fingers stuck together, ready to eat the onion?  Europe's most pliable people? Your eyelids are getting heavy...

Could this also be why more and more societies are experiencing epidemic levels of depression, anxiety, sleep disorders and even psychosis? One of the insights from Human Givens is that 'too much' REM sleep leaves you exhausted as you don't have enough time during the night to experience the deep, restorative sleep between dreams that boosts your immune systems and energy stores.  We are depleting our 'attention resources' to our own and to society's detriment.  Lack of sleep makes you stupid (and angry and unreasonable) too.

Where will our collective entrancement end? Some worry about the age of surveillance capitalism. Certainly we are experiencing something unprecedented as a species: the speed and scale of adoption of smart phones and all that goes with them leaves us without either 'patterns' or 'metaphors' to navigate the times we live in.  Cal Newport suggest, future generations may look back at smartphones the way we look back at cigarettes: amazed at all those people in the old movies smoking way too much. Of course, the recognition of the harm done by smoking came too late for many millions of former users. Will we recognise the harm being done by our collective entrancement before it's too late? 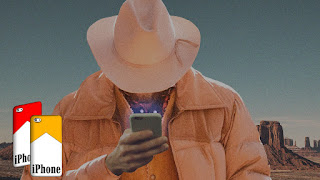